for the last one month I’ve been observing international media coverage on an alleged ‘writ petition’ filed against Bangladesh constitution 8th amendment that introduced Islam as a state religion. reading these so called ‘news articles’ I was slightly perplexed, as to my knowledge no such write had been filed in recent times. I would have known, we would have known.

I did not pay attention, International news media has to live and these ‘news and opinion’ platforms regularly run paid for pieces. In today’s world, the biggest of money sack, you guessed right, is Islamists. More specifically, the Dawah ministry of Saudi Barbaria.

Islam could be dropped as Bangladesh’s official religion following a number of attacks in the country against people of other faiths.

Christians, Hindus and Muslim minority Shiites have recently faced attacks that are believed to have been carried out by Islamic extremists.

The whole world, including the interweb became exceedingly ecstatic, like a holywood movie. Bad guys will loose to the good guys, secularists, in court, in an epic battle. We could barely hold our breath.

Truth is, as Maher Satter clarifies, in this NYT article:

It came as a surprise to Serajul Islam Choudhury, a retired English professor, to learn that his petition to drop Islam asBangladesh’s state religion would finally be heard in court on Sunday.

For one thing, he filed the petition 28 years ago. Of the 15 friends who had signed, 10 were dead.

Back in 1988, old-school secular elites like Mr. Choudhury and his friends warned that naming Islam the state religion would set the country on a slide toward fundamentalism. But the country’s military leadership, eager for the populist boost it got from passing a constitutional amendment that year to make Islam’s status official, shrugged off their worries. The petition went nowhere.

The ‘writ’ petitions submitted way back in 1988 as a response to the then Military dictators attempts at using religion to save itself. almost 28 years ago.

Somehow, the court system decided, now is the time to suddenly organize ‘hearing’ on these petitions to repeal the infamous ‘8th Amendment of Banlgadesh Constitution‘ . Hearing date was settled for 28th of March. 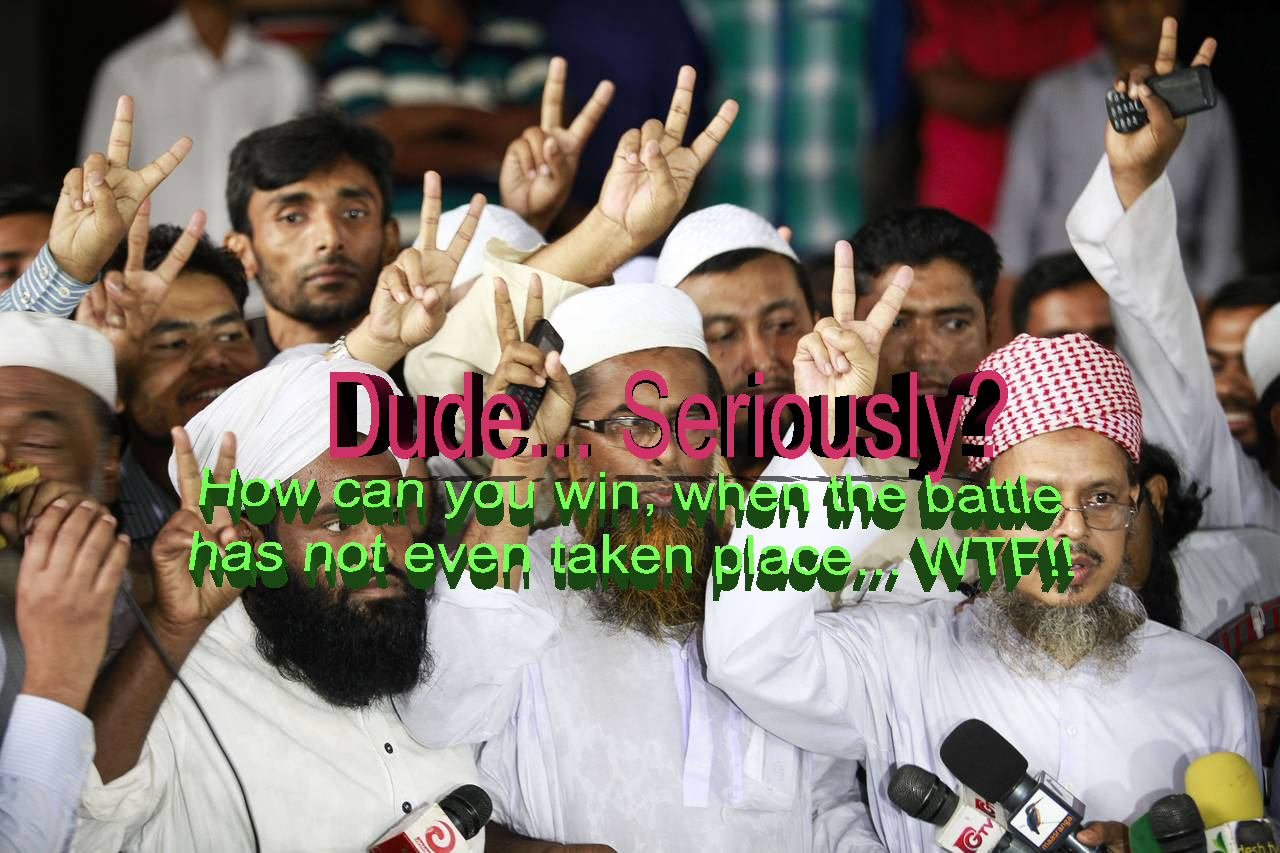 The petition was due to be heard on the bench formed of three justices, at the begining, even before the actual content of the petition could be opened up for hearing, the judges deliberated on the admissibility.

It was found that the ‘locus standi’ was not met. For those who don’t understand this legal term, here’s an explanation:

The right or capacity to bring an action or to appear in a court.

Essentially, the petition was dismissed before a proper hearing could take place. No one even discussed the merit of the arguments of the petition(s) and thereby, the judges had not made any decision about the 8th amendment itself.

In Bangladesh, (and elsewhere) however, this ‘false news’ brought up huge discussions. Islamists were expressing rejoice that Islam has been upheld as the state religion. Some secular activists expressed enormous grief on this devastating judgement. It is a total chaos everywhere.

Islamist countries worldwide, such as Saudi, Pakistan were very much anxious for a favorable judgement. After all, the military dictator helped the Islamist cause by embossing this archaic way of thinking on the forehead of a secular nation, what great victory. This writ endangered everything!

on the other hand, ‘news’ of this miracle writ petition made secular humanist bodies everywhere bite their nails in eagerness, especially after what happened in 2015 in Bangladesh. [for a brief, check my previous blog]

Unfortunately, for both sides, this was kind of a draw. The battle did not even take place. The match was cancelled. I don’t know what other analogy I could use to describe what ‘actually’ happened.

But the so called international media mentioned earlier, did not pay attention to silly semantics. The went ahead and sensationalized the ‘news’ [or lack of it] to a degree, that the world felt the rare ‘Islamist orgasm’ everywhere. Islamists, mullahs, demagogues, dictators, anybody and everybody who were on Saudi payroll, rejoiced in extreme delight celebrating the ‘fact’ that ‘Bangladesh upheld Islam as state religion’. Despite the truth being far from it, Islamists continued celebrating their imaginary victory, same as their imaginary God and their made up religion. here are some examples of ‘world media coverage’ of this ostentatious event of Bangladesh…

The petition had threatened to inflame political tensions over the role of Islam in the Muslim-majority country.

Bangladesh’s first constitution, framed after independence in 1971, adopted secularism as one of its main principles, along with socialism. A constitutional amendment in 1988 declared Islam the state religion.

Lawyers for the petitioners, a group of 15 activists, had argued that recognizing Islam as the official religion contradicted the secular nature of the state.

The petition was filed in 1988 and the High Court’s case backlog meant it wasn’t heard until Monday. Most of the 15 plaintiffs who filed the writ—a diverse group of writers, academics and lawyers—are now dead.

The state religion provision is largely symbolic, since the country’s laws are secular. Although the petition, if successful, would have made little practical difference, it had the potential to become a political flash point at a time when Bangladesh is facing a surge of extremist violence linked to militant groups such as Islamic State.

Politics in Bangladesh has long been split over the question of religion. The Bangladesh Nationalist Party, now in opposition, supported the provision of Islam as the official religion when it came to power in 1991, arguing that it was a status that reflected the heritage of the vast majority of the population.

The Awami League party, led by current Prime Minister Sheikh Hasina, brought in constitutional amendments in 2011 that restored secularism to the constitution but retained Islam as the state religion.

Islamist political parties had called for a general strike on Monday to protest the legal challenge, but withdrew the call after the High Court dismissed the petition following a brief hearing.

The three-member panel of judges said in its ruling that the petitioners had “no locus standi,” a legal term that means the plaintiffs have no grounds for the complaint and haven’t shown that they have been harmed by the law they are seeking to challenge.

The South Asian nation’s population is almost 90% Muslim, with Hindus making up 8% and Christians and other faiths the remaining 2%.

Some lawyers and activists have argued that Article 2A of the constitution, which recognizes Islam as the “religion of the Republic,” contradicts Article 12, which declares secularism to be a principle of the state.

Those who oppose dropping Islam as the state religion point out that Article 2A also says the state “shall ensure equal status and equal right in the practice of the Hindu, Buddhist, Christian and other religions.”

Bangladesh, long cited as an example of a moderate Muslim-majority country, has faced a surge of extremist violence in recent months amid concerns international terrorist networks such as Islamic State and al Qaeda are seeking to gain a foothold here. Such groups are exploiting a political vacuum created by the bitter rivalry between the ruling Awami League and the main opposition Bangladesh Nationalist Party, security analysts in Dhaka say.

Islamic State has claimed responsibility for several attacks on foreigners and religious minorities since September.

The Bangladeshi government has denied that extremist groups such as Islamic State are operating in Bangladesh, and has blamed violence on domestic Islamist groups.

A high court in Bangladesh rejected a petition Monday that challenged a constitutional provision recognizing Islam as the state religion. The bench, headed by Justice Naima Haider, Justice Quazi Reza-Ul Hoque and Justice Ashraful Kamal, said that secular petitioners do not have the right to file the writ petition, according to local reports.

The public interest litigation was filed by 15 noted personalities in the country after the passage of the Eighth Amendment Bill on June 7, 1988, which declared Islam as the state religion, Dhaka Tribune, a local newspaper, reported. Many of those who filed the petition have since passed away. The case was not taken onto the discussion table until last August when Supreme Court lawyer Somendra Nath Goswami filed another petition challenging the state religion provision saying that it was against the basic secular structure of the state.

Goswami also asked for a justification for holding on to the clause despite the government restoring secularism through the 15th Amendment to the Constitution in 2011, the Dhaka Tribune reported Monday. The petition was heard on Aug. 30, 2015, and rejected by the court on Sept. 7. This February, Chief Justice Surendra Kumar Sinha created a three-member bench to hear the 1988 petition after a prayer was submitted on behalf of the petitioners.

“Bangladesh is a 90 percent Muslim nation,” the group said in a statement, according to AFP, adding: “The people will never accept any government move to remove Islam as the state religion from the constitution in an effort to please a handful of anti-religion persons.”

Subrata Chowdhury, who represented the secular activists in the case, said: “We are saddened (at the ruling). It’s a sad day for the minorities of Bangladesh.” He also said that the court did not allow the petitioners to state their case or present any arguments in the case. “The judges simply said the rule is discharged,” Chowdhury said, according to AFP.

Last Friday, about 7,000 activists came out on the streets in Dhaka to protest the high court’s decision to hear the plea and chanted anti-government slogans.

Jamaat-e-Islami reportedly said it held protests in nearly half a dozen neighborhoods in the capital city of Bangladesh.

The latest move by the court may heighten tensions between secularists and hard-liners in the South Asian country, where several atheist bloggers, members of religious minorities and foreign nationals have been killed.